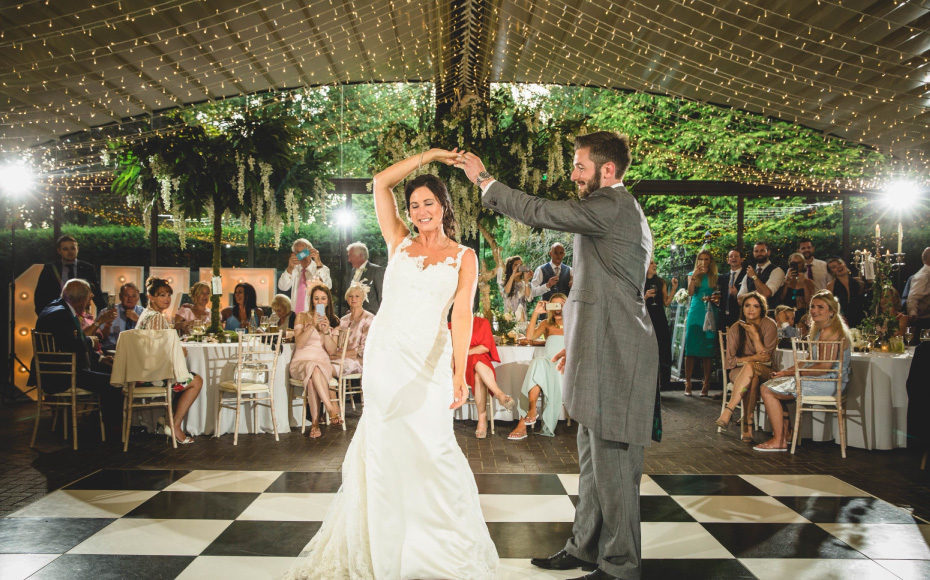 The most popular first dance wedding songs varies depends on the age of the couple, the preferred genre of music, and the theme of the wedding. All eyes are on you for the first dance, and it’s one of the most memorable moments of your special day, so choose your first dance song carefully.

Here are six of the most popular choices, across a wide variety of musical styles:

1. Unchained Melody by The Righteous Brothers

The 1965 classic is more popular at weddings than the original 1955 version sung by Todd Duncan, or any of the later cover versions by various artists including Robson and Jerome in 1995, which was top of the UK charts for 7 weeks, and boosted Simon Cowell’s music mogul career significantly.

The Righteous Brothers’ version holds steadfast as the most loved version, in part thanks to its use in the 1990 Blockbuster film Ghost, and is a timeless melody for a first wedding dance, in particular for baby boomers and Generation X couples.

2. All of Me by John Legend

This one is a firm favourite with millennials, which is hardly surprising as the song made its debut in 2013. The song is dedicated to singer John Legend’s wife Chrissy Teigen, which gives the lyrics a personal touch. The simple melody is performed on a piano and is perfect for a slow dance.

3. At Last by Etta James

Gen X and the baby boomers have another firm favourite with At Last, which originated in 1941 but was made popular by American singer Etta James in 1960. The rhythm and blues arrangement didn’t reach a number one chart position, but is still well loved on both sides of the pond, and is a popular choice for a first wedding dance.

4. I Don’t Want to Miss a Thing by Aerosmith

Rock music loving couples of the Generation X and millennial generations agree that Aerosmith’s 1998 ballad is a perfect tune for a first dance at a wedding. The song was written for the film Armageddon starring Liv Tyler, the daughter of Aerosmith’s lead singer Steven Tyler. The song hit number one in several countries worldwide, and is a slow dance favourite.

5. A Thousand Years by Christina Perry

This 2011 song was written for the cult hit vampire film series Twilight, based on The Twilight Saga books by Stephenie Meyer. The romance between the two main characters of the saga is depicted by the enchanting lyrics, and it’s probably going to remain a staple on the first dance wedding songs list for many years to come.

The King of Rock and Roll transcends the generational gap with this 1961 hit, which stayed at the top of the British charts for four weeks the year after its release. Reggae band UB40 performed a more up-tempo cover version in 1993 which reached number one in various countries, but nothing beats the original for a wedding dance. Slow and romantic, it’s everything you could want for a first dance on your special day.